Everything you need to know to participate in our tests with enabled translations.

We would like to bring our customers who have requirements for specific languages and you, testers, closer together by removing the language barrier. This means that in some tests of our customers, you will be able to see test instructions and report bugs in 3 languages - Russian, English and German. Russian, English and German are the 3 languages we would like to start with, but in the future we plan to extend this list to more and more languages, so that most of our Community member could report bugs in the native languages.

Such tests with enabled translations will be marked as follows on your dashboard:

❗Important: Only in the tests marked with "Translation enabled" will you be able to submit bugs in your native language. For all other tests, the rule remains the same - you should report your bugs only in the test language.

For the tests with translations enabled, we will be removing the language requirement from the invitation logic. This means that you might be invited to such tests if you speak one of the languages languages RU, EN or DE, and potentially don't speak the test language. For such cases, we will be offering a translation service for you. This way you will have access to more tests and our customers, in return, can benefit from more testers and their different testing methods.

In the tests with enabled translations, you will be able to see test instructions in 3 languages: EN, RU & DE: 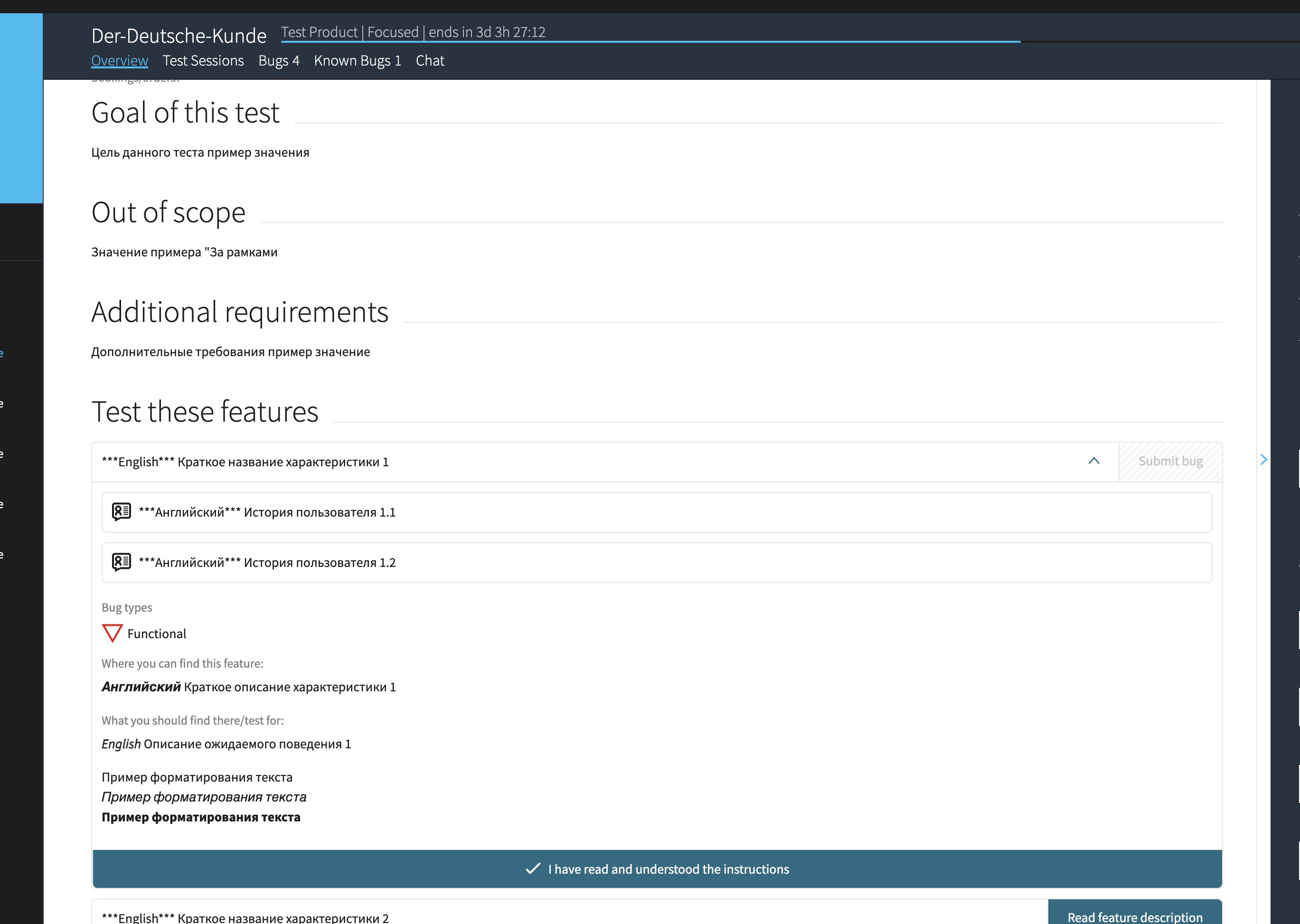 Both test interactions as well as Feature descriptions and User Story titles will be available as automatic translations.

The rest of the processes for bug submission remain the same - you should fill in all the fields of the bug report form and provide as many details as necessary in order to understand your bug. Only now you can do it in the language you indicated as the source language of your bug report.

Once you submit it, the translation will be triggered and within some seconds, you will be able to view your bug report in your source (the language you reported your bug in), target (the test language) languages, and in English (if it is not your source or target language already).

❗Important: the text surrounded by the quotation marks "" will not be translated. So, if you use "" marks in your bug report, make sure that it is used only for the terms that do not need translation.

For the tests with translation enabled, the rule of bug duplicates remains the same as in our regular tests: duplicates are not allowed and will be rejected.

When you document your bug report and indicate that there is a translation needed for your report, you will still be able to check for Similar bugs. In this case, whenever you input any text into the bug report form and need to check for Similar bugs, you will simply have to press the "Check for similar" button in the bottom action bar next to the "Submit" button. The similar bug matches will then appear in the right navigation bar above the Feature description. The Similar bug matches will be shown in English no matter what language you are submitting your bug report in. 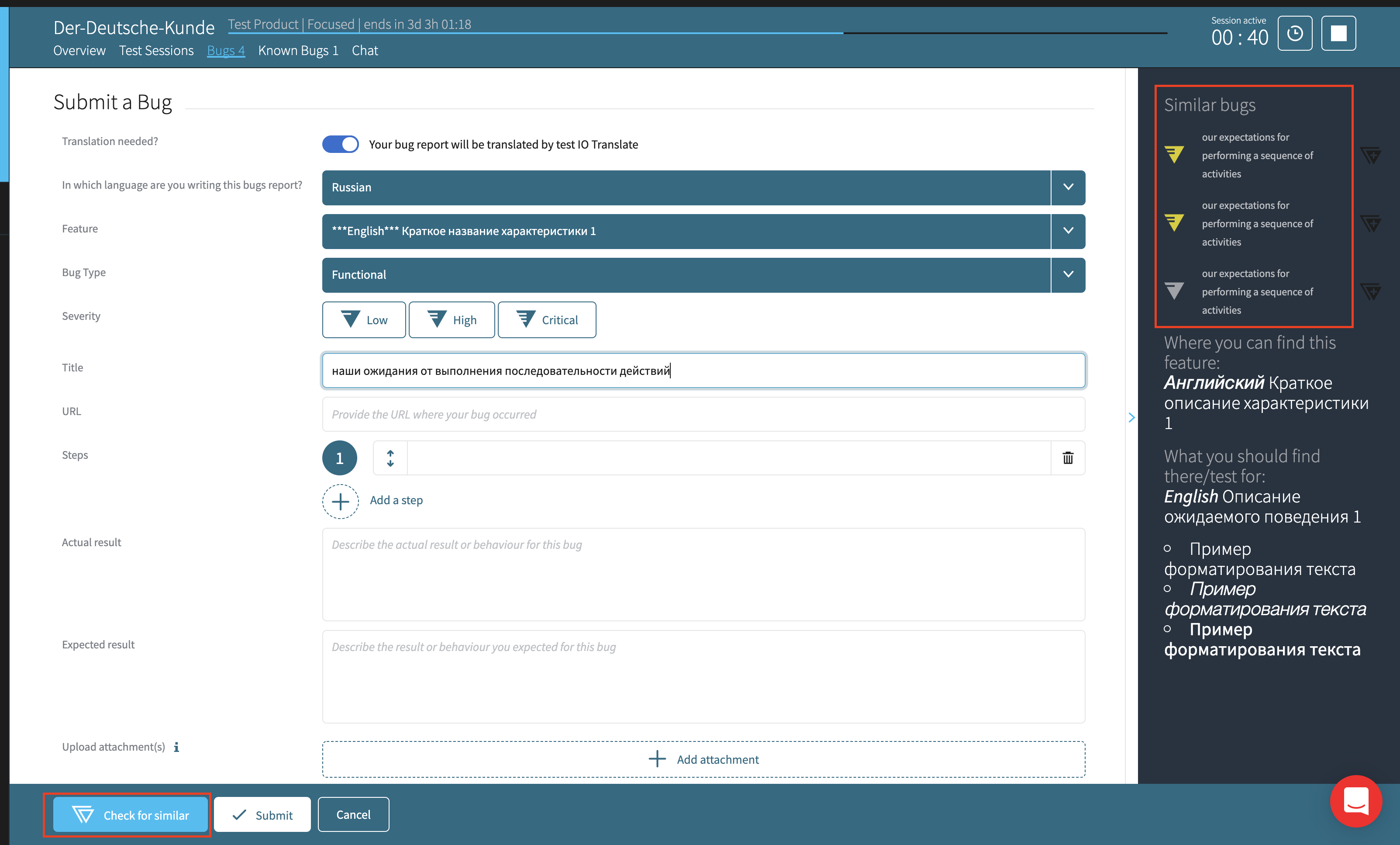 When it comes to the attachment rules for bug reports, bug reproductions, and User Stories, the rules remain the same as for regular test IO tests: the date should be shown in latin characters in any common date format, e.g. DD/MM or MM/DD. So, even if you report your bug in Russian, for example, the attachment should still be understandable to our customers (attachments will not be translated), so please display the date either in a common format. All our regular attachment rules apply.

User Story executions described in the language that is not the test language will be rejected 😔.

At any point of time until the Team Leaders reviews your bug or while you have an open information request, you can edit your bug reports that have been translated by our translation services. Note that you can only edit the source language version of the bug. So, for example, if you submitted your bug in Russian and it was translated into German, you will be able to edit your Russian version of the bug. Every time you edit your bug reports, all available translations will be updated according to your changes.

If the Team Leaders edits the target language version of a bug report in oder to improve an automatic translation, the edits will be reflected in the test language and the EN versions of the bug.

So if you need to see the latest translation version of a bug, you should always refer to the EN or the test language versions.

Since bug comments are not yet part of our translation service, all communication should take place either in English or alternatively in the test language if all participants speak this language.